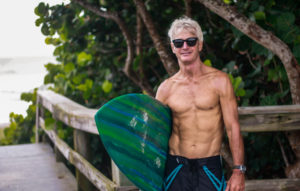 The aging process is repulsive. Dangerous abdominal adiposity, inflammation, insulin resistance, skin laxity, loss of hair, muscle mass, sexual and cognitive function are but a few the delights that the medical community considers “normal” aging, has in store.

I am currently 62 years old and in addition to being a decades long researcher of treating hair loss, have been a long-time researcher of the aging process, and what can be done to not only stop it in its tracks, but reverse it as well.

I don’t have to do more than go surfing at my local break to get motivated. What I see walking and sitting on the beach are examples of what happens to those who don’t effectively intervene on aging. The mere revolting visual impact of what these people look like motivates me far more than an any conscious effort at trying to look “good” or have big “bro “pecs and biceps.

This, call it an obsessive – avoidance response, has resulted through many years of research (of which hair loss research has been a big part of), culminating in an approach that for me, has hit pay dirt.

I am in better shape and actually surf better now than I was in my early thirties. Nothing against the body builders among us, but my ideal body type, resembles more Bruce Lee, or Conor McGregor vs Charles Atlas or a young Arnold Schartznegger. Although I am 62 years, I routinely get carded for wine, while my heavy sun exposed (which I also am) same age surfing buddies, god love them, are dermatologically indistinguishable from the homeless.  My testosterone levels are significantly higher than “normal” without having to resort to, as many “anti-aging” personalities have, testosterone replacement.

In addition to a targeted anti-aging exercise routine, I additionally train at an MMA dojo, and have a blue belt in BJJ, hoping to have a purple in the near future.

Yoga:  Indo-Tibetan, and Taoist practices, gleaned from ancient traditions specifically designed to stop and reverse aging, that are largely unknown in both the West and East, are additionally incorporated.

I likely do much more than I actually need to. However, given the option of falling short and say losing hair, becoming insulin resistant, increasing my risk for cancer, or physically resembling any of the aforementioned on the beach, I’ll take overkill any day of the week.

What I generally encounter with most that attempt to intervene on aging is that their approaches are generally 1 or 2 dimensional, and, given their methodology, the best that they can hope for is to slightly slow aging.

Many, like some of my friends in the academic research community, only pay attention to the bio-tech, pharma pipeline, with drugs like Metformin, Rapamycin, and Senolytics such as Fisetin and the combination of Dasatinib and Quercetin. Some emphasize exercise and diet, to the general exclusion or insufficient emphasis on incredibly useful drugs and supplements and ancient esoteric practices. Others who are high level practitioners of qi gong, and Indo-Tibetan tantric practices, who although amazingly young looking, know next to nothing about or are decidedly against anti-aging pharmaceuticals, that are without a doubt highly useful.

Simply “slowing aging” to me is the booby prize. The name of the game to is minimally stop aging in its tracks, and to actually reverse the process, which is actually more attainable now than it ever has been.

An increasing body of evidence has demonstrated that, this is no far-fetched fantasy.

Given the evidence-based data on aging intervention that continually emerges, it is evident that we are gaining control over biological aging.  And that’s where I know I can help.

My own expedition through life has taken me all over the world, and repeatedly to the to the modern and ancient science of age reversal, which has revealed methodologies that reliably decelerate and reverse human aging

I am Kelly, a Board-Certified Behavior Analyst, and former Advisor at the Life Extension Foundation, who specialized in both anti-aging fitness and the prevention and treatment of facial aging and Androgenetic Alopecia (Male Pattern baldness).

My focus is on aggressive and affordable age reversal, and enabling others to maintain both their appearance, cognitive and physical functionality and radically extended lifespans, in practical and affordable ways.

By collaborating we can target and eliminate the variables that compromise and age our bodies and minds, and design a viable, anti-aging regime that is both streamlined in terms of time, and affordable.

As such, you can create and indefinitely maintain the strongest version of yourself.

Email us at info@hairloss-research.org  to schedule a free 15-minute session with me. You’ll come away with at least 2 or 3 things you can do to look, feel, and live younger.